Gifted and versatile are two words that best describe singer, songwriter, musician, producer, composer actor & director alvin frazier.  Born and raised in Cleveland, Ohio, alvin has been singing since the age of two and pecking at the keys since the age of three.

A self-taught musician, alvin would teach himself to play 5 instruments; piano, guitar, bass, drums & percussion. Growing up with 2 musician parents it was inevitable that young alvin would also pursue a path in music and the arts. Over the years he would do just that, forming music groups throughout his formative years ranging in styles from R&B, Hip-Hop, Gospel to Jazz. Indeed a triple-threat, alvin has built a reputation for being a dynamic performer and entertainer who leaves his audiences spellbound. Fusing the sounds of R&B, Soul & Jazz with a message of faith, love & hope, alvin has been able to captivate music fans across the globe with his unique delivery and ultra-smooth, yet soulful presentation. His sultry and pure tenor voice is often compared to crooners such as Eric Benet', Maxwell, JOE and Michael Jackson. He offers yet another facet of his amazing performance and musical ability when he plays guitar with comparisons to jazz greats such as George Benson, Norman Brown and Earl Klugh.

Now an accomplished vocalist, musician and performer, alvin has shared the stage with the likes of George Clinton w/ Parliament - Funkadelic, The Ohio Players, SWITCH, Chante’ Moore, Eric Roberson, Conya Doss, Brandon Williams, Taral Hicks, Kenny Lattimore, Avery Sunshine, Najee, Angie Stone and Frank McComb.  As a recording artist, alvin has released and produced 3 albums as a vocalist, “Love & Faith: Vol. 1” (2006), “A Wonderful Love: Love & Faith Vol. 2'' (2013) and "RIVER" (2021). His album "A Wonderful Love: Love & Faith Vol. 2" entered the UK Soul Chart at #27 and within a few weeks peaked at #2. The first 2 projects were recognized as one of the Best R&B / Soul albums of 2007 & 2013 in Japan respectively. His latest single, "Lost in Love" has taken off like a skyrocket giving those who love classic R&B a reminder that it's alive and well with this beautiful, heartfelt ballad. Considering that he is a product of that classic era of soul music it comes as no surprised that in July 2021 he was recruited to become a member of the legendary Grammy Award Winning Motown group the Dazz Band. For the past 5 years alvin has also been a musician for MetroHealth Hospital Systems as a part of their Arts in Medicine program.

Aside from performing as a vocalist and musician, alvin is also an established actor. He appeared in the highly-anticipated Miles Davis biopic "Miles Ahead" directed by & starring Don Cheadle, "With this Ring" on the Lifetime channel with Jill Scott, Regina Hall, Eve & Gabrielle Union, the controversial true-crime film documentary "A Murder in the Park" and in 2017 toured with the stage play "SOULmate?"  playing opposite singer / actress Taral Hicks from the films "A Bronx Tale" & "Belly". In 2016, he took on another creative venture in the launching of a clothing brand The alvin frazier Collection. His most recent film appearance was in "Judas & The Black Messiah" starring Daniel Kaluuya & LaKeith Stanfield. To say that alvin frazier is one of “The Hardest Working Men in Show business” would be an understatement. He is the definition of a “true” entertainer / artist. 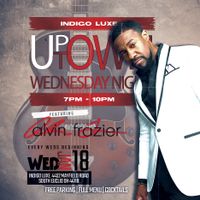 The Man, the myth, the legend returns with another midweek set UpTown Wednesday Nights at Indigo Luxe for an evening of smooth solo guitar and good vibes. You will definitely enjoy yourself! 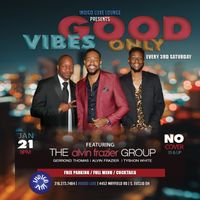 The dynamic trio returns to one of it's favorite hot spots to perform for another night of amazing music. See them at Indigo Luxe every 3rd Saturday!! Good Vibes Only! Food, drinks and no cover. 35 & up.